Lionel Messi What Is The Reason Behind Exit From FC Barcelona 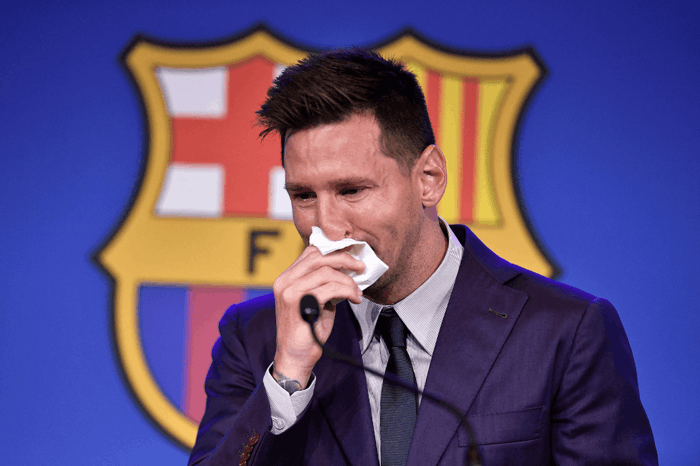 In an emotional press conference Spanish footballer, Lionel Messi has confirmed his departure from the Barcelona football club. The farewell speech of Lionel Messi after which the news got trending was extraordinarily emotional, especially when Lionel Messi arrived on stage. While shedding tears Lionel Messi waved a final goodbye to FC Barca and his 21-year career with FC Barcelona came to a tearful fall.

The tearful exit of Lionel Messi from FC Barsa and his deprived farewell speech made every one of his fans gust and aspirate. He is standing at a comparable level with Cristiano Ronaldo for the last 17 years.

In the press conference, Lionel Messi at first had to address his last message through a farewell speech and secondly had to reply to news reporters’ questions but in his speech, he covered every aspect of his fall and more especially that what would he do next.

What is the Reason Behind Lionel Messi’s exit from FC Barcelona?

Lionel Messi, during his farewell speech, claimed that he joined FC Barca at the age of 13.

” Everything was quite okay until it happened. I never thought about leaving FC Barca. I am feeling entirely devastated because I love FC Barsa,  ” Said Leo Messi.

FC Barcelona could not renew the contract with Lionel Messi because of the financial crisis.

FC Barcelona asked him to reduce his wages up to 50℅.

” I followed the instructions and agreed upon 50 ℅ of my pay. I expected that I would sign the deal for the upcoming five years at 50 ℅ reductions of my pay. “Said Messi.

Though they couldn’t finalize a deal.

According to him he never expected to have a tearful departure from FC Barcelona.

Messi fans consider that FC Barcelona hasn’t made enough for Messi to stay at FC Barca.

” It Brought a Lot of Pain To Me, ” Said Lionel Messi in His Speech.

He thought to renew the contract with FC Barcelona on 1 July 2021.

Everything was fine up to the last minute but he couldn’t sign the contract due to new LaLiga rules. After that, the club confirmed his exit and on 5 July he was now a free agent.

According to LaLiga rules, Messi has to reduce his pay up to 70 ℅ . He had already agreed upon 50 ℅ pay but 70℅ pay reduction wasn’t possible for him.

FC Barcelona confirmed Lionel Messi’s departure on the night when he arrived back to the club from America intending to sign the contract with FC Barcelona.

” I have played 21 years for FC Barsa. I have always considered FC Barsa as my home. My family and I were willing to stay here in FC Barca but today I’m waving the final goodbye to all of you. I am leaving all of you with my wife and my three Argentine children.  But I would usually come here because I consider it my home.  ” Said, Lionel Messi.

His Fans Across the Globe are Saying that why Couldn’t Messi Agree upon a 70℅ Salary Reduction?

Messi Says  My pay was never an issue. I never played for money.  I had already agreed upon a 50℅ reduction of my pay but the expenses of FC Barsa are so high that FC Barsa can’t afford me even at free of cost. ”

Lionel Messi probably loves FC Barcelona and he could play for it totally free but to understand this you have to look at the graph of financial expenditures to FC Barcelona.

FC Barcelona’s wage to revenue ratio is 115 ℅  after Lionel Messi’s exit it remains still up to 95 ℅ . So, if he agreed to a salary reduction, FC Barcelona wouldn’t be able to afford him.

After reducing the entire expenditures of Messi, FC Barcelona still have to face a huge financial crisis.

Has Messi Now Moved to PSG?

After a tearful fall, Messi is now receiving offers from different Clubs but yet Messi hasn’t responded to anyone’s offer.

Though Messi’s future seems uncertain people expect that he would move to Paris Saint Germain ( PSG ).

” I am affected and broken after such a fearful fall. I haven’t confirmed the proposal from anyone yet, but PSG seems like the possibility, “said Messi.

Lionel Messi’s picture with PSG circulating around social media was a coincidence.

” It was a joke.  We are friends and we decided to take a photo together when they came to Paris.  We shot the picture during a house party. This picture has nothing to do with my PSG joining. ” said Messi.

Some reports are suggesting that Messi could sign a contract with PSG in the upcoming 48 hours.